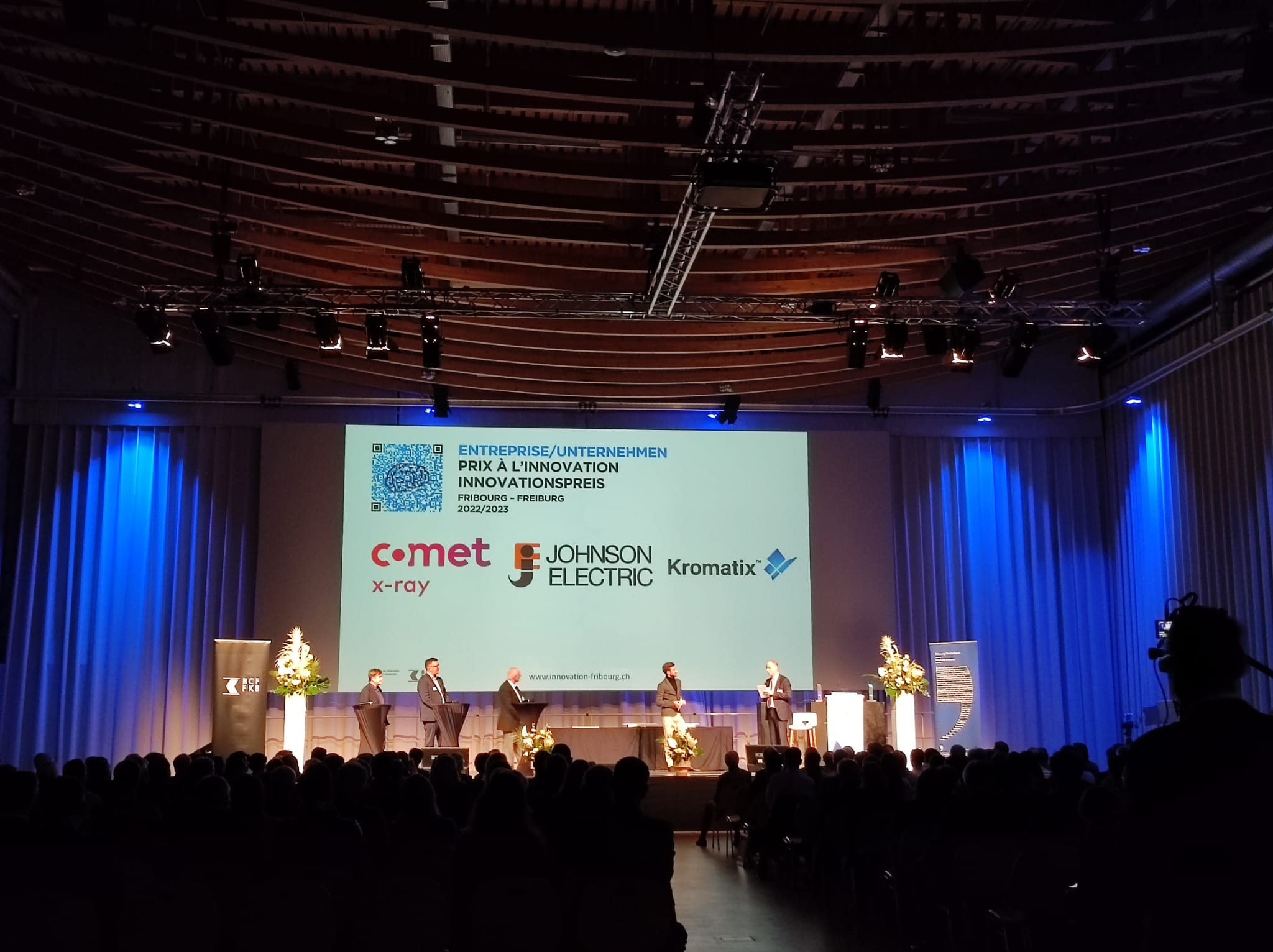 On Wednesday evening, the Canton of Fribourg honored its most innovative companies. The Business Award went to Comet Ltd based in Flamatt, while the Start-up Award was given to Neuria from Fribourg in accordance with the results of a public vote. Awarded this year for the first time, the Sustainable Economy Award was attributed to PMF-System based in Marly. The Awards Ceremony took place in the presence of the nine finalists at Forum Fribourg and was broadcast livestream.

Comet: New X-ray Technology for the Testing of Batteries for Electric Vehicles

Comet was presented with the CHF 10,000 Business Award by Daniel Wenger, President of the Executive Board of the Fribourg Cantonal Bank. The Company has developed an entirely new technology for X-ray sources that enables batteries produced for electric vehicles to be tested in a more efficient manner.

Defective batteries can, for instance, provoke fires. The safest way to detect production defects is through X-ray inspection. Traditional X-ray testing procedures, however, are only suitable to a certain extent: either they make production errors visible, but the modules are not suitable for an industrial environment; or the testing procedures are suitable for production processes, but the image quality is insufficient. Comet’s MesoFocus X-ray technology enables accurate testing of batteries in an industrial environment. The result is long-lasting batteries and increased safety for electric vehicle users.

In selecting Comet for this year’s Business Award, the panel of judges honors a technology project that provides a practical answer to a highly topical and relevant problem. With its innovative MesoFocus X-ray technology, Comet not only enhances safety in the field of electromobility, but also opens a new market with the automotive industry.

Start-up Award: The Judges and the Public cast their Votes for Neuria

The winner of the Start-up Award is the company Neuria which received the most votes. The winning start-up was chosen by the judges and the public. Ever since the finalists were announced a month ago, the public has been able to cast their votes and, in addition, those who watched the Awards Ceremony were also able to participate in the voting process by sending an SMS text message.

Neuria from Fribourg has developed a digital therapy hidden in video games for the purpose of improving eating behaviors. Conventional approaches to treating obesity rely on prescribing restrictive diets. Because these diets often involve fighting against cravings and since it becomes frustrating to maintain control over such desires in the long term, 90% of the time they are doomed to failure. Neuria has reversed this paradigm with the discovery of a way to modify food preferences. The Start-up has identified cognitive tasks whose repeated practice induces targeted brain plasticity in the brain’s reward circuits, which results in reducing the appeal of unhealthy foods. Consequently, a person will consume a lesser quantity of such foods with a natural loss of weight. The training tasks are “hidden” in smartphone video games. All one needs to do is to play and have fun, and their health is improved or restored without even realizing it.

PMF-System, based in Marly, was the recipient of the unprecedented presentation of the Sustainable Economy Award of the Canton of Fribourg, endowed with CHF 10,000. The Company has developed a digital assembly assistant for SMEs and sheltered workshops. Inspired by the pledge “No one will be left behind” as laid down in the UN’s 2030 Agenda for Sustainable Development, PMF-System’s digital assembly assistant opens the doors of the labor market to facilitate the inclusion of individuals with disabilities. The digital assistant directly impacts the possibilities of sheltered workshops to expand their product range and of SMEs to manufacture more efficiently.

The Sustainable Economy Award was presented by Chantal Robin, Director of the Fribourg Chamber of Commerce and Industry (CCIF) and member of the panel of judges. The Award is attributed jointly by the CCIF, the Cantonal Service of Energy, and the Fribourg Development Agency (FDA).