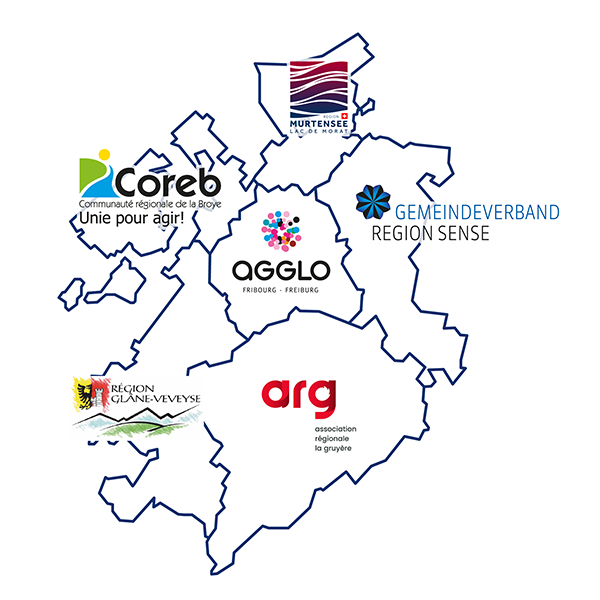 The New Regional Policy (NRP) is an initiative launched in 2008 by the Swiss Federal Government. It seeks to foster innovation both in in industry and tourism by providing financial support in the form of loans and non-repayable grants or subsidies.

The NRP of the Canton of Fribourg financially supports innovative projects that contribute to fostering a high quality, sustainable growth, to enhancing the attractiveness of the Canton, and to generating added value.

The program enables all of the actors concerned hailing from the world of business, the academia, the tourist sector and the political authorities, to cooperate towards a single, common goal, that of enhancing competitiveness in the regions of the Canton of Fribourg.

Within the scope of the program running from 2016 to 2019, the NRP provided support to more than 63 projects in the Canton of Fribourg, including:

While developing the program for implementation of the NRP in the Canton of Fribourg for the period 2020-2023, three axes of strategic thrust were specified, namely, the strengthening of the bio-economy (agri-food industry), the fostering of digital anchoring, and the expansion of the notion of developing Smart Territory.

In order to boost the competitiveness of its companies, the Canton of Fribourg is to encourage the utilization of tools that promote innovation within its companies via the services of the association INNOSQUARE, the Canton’s thematic clusters (Building Innovation Cluster, Food&Nutrition Cluster and Swiss Plastics Cluster) and the Canton’s academic actors (UniFR, HEIA, HEG, EPFL) so as to develop collaborative projects.

The program is also to continue to provide support to the association Fri Up, which flanks the start-ups and future entrepreneurs established in the Canton.

Finally, the industrial thrust of the Canton’s NRP program for 2020-2013 is to be rounded out by the fostering of inter-cantonal projects via the RIS-SO with its technology platforms and coaching bodies, bi-cantonal projects in the Broye region or via the Swiss Capital Region, and the transnational program INTERREG.

In keeping with the principles set down in Vision 2030 for tourism in Fribourg as published in 2009 by the Fribourg Tourism Union (Fribourg Region) and in view of tackling the major challenges confronting tourism in the Canton, the NRP’s 2020-2023 program essentially aspires to support projects linked to the development of tourist infrastructures, the simplification of tourist authorities, and the exploitation of the strong points specific to tourism in Fribourg.

Against this backdrop, the NRP will contribute to enhancing the added value created by the tourist sector in the Canton by fostering a spirit of innovation and entrepreneurship through innovative projects designed to create value.

The Assytronic Collaboration Project (Collaborative project)
Project Lead: 6 companies spreaded out 5 districts, HEIA Fribourg.
This project concerns the development of a plastic injection process for the assembly of mechatronic products (e.g. hearing aids) and follows a first collaborative project (ASSCO). Complete development, in the form of reports, prototypes and case studies of integrative assemblies by overmoulding.

Sponge City blueFACTORY
Project Lead:SINEF SA, blueFACTORY SA
The project concerns the development of the first neighbourhood in Switzerland with hybrid wastewater management. The aim is to have no water discharged into the water treatment plant and to have a climate-resilient neighbourhood. This project will provide a full-scale test of current and future possibilities for water use.

Tourist valorization of medieval heritage (Tourist Innovation)
Project Lead: 4 projects spreaded out Fribourg, Morat et Estavayer
Four projects related to the valorization of medieval heritage were supported between 2016 and 2019 : the Fribourg ADN1606 project, the Secret Morat Lights Tour, Estavayer Le Grand Jeu and the Street Art ArtiChoke festival also in Estavayer. These products and activities are complementary for the three destinations and should generate economic spin-offs in the order of CHF 6 mio/year.

The regions, companies, networks, as well as all interested individuals may address a request to the Fribourg Development Agency for the following types of financial support:

The financial support granted within the frame of the NRP is borne equally (50 – 50) by the Swiss Federal Government and by the cantons. In general, the financial aid contribution assumed by the NRP represents a maximum of up to 65% of the eligible costs, the remainder having to be covered by the recipient’s own funds.

Besides the NRP, there exist other possible sources of financing. To explore such other options, we would suggest that you use the financing tool developed by RegioSuisse, which will indicate the possibilities available as a function of the domain under which your project falls. Your regional association remains at your disposal to direct you to the financial sources that can be envisaged.

INNOREG-FR, the Association of the Regions of Fribourg for the New Regional Policy (NRP), was founded in 2009 by the Prefects (or Governors) of the Canton of Fribourg. Its creation followed close upon the launch of the Swiss Government’s NRP program (formerly the Law on Investments in Mountain Regions – LIM) and was designed to enable the regions and the Canton to implement the NRP on a regional level.

Its purpose and goals are to:

Thanks to INNOREG-FR, the project leads enjoy an enhanced overall view of the possibilities offered by the NRP as well as support when submitting their project.