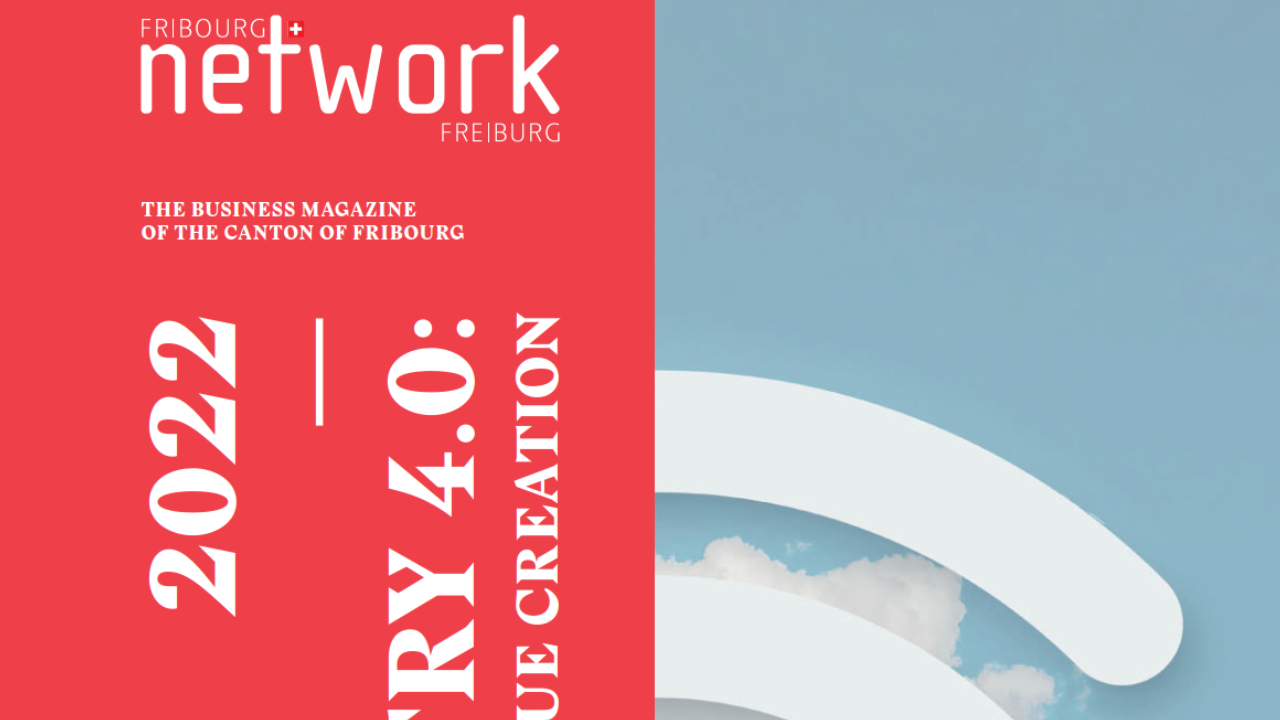 FRIBOURG NETWORK FREIBURG 2022 EXPLORES THE IMPACT AND POTENTIAL OF DIGITALIZATION

The digital transformation of the Fribourg economy is well under way. Since its emergence in the early 2010s, Industry 4.0 has gone from being a mere concept to an everyday reality for many companies in the canton, and an integral part of their development strategies. The 2022 edition of Fribourg Network Freiburg, the official business magazine of the Fribourg Development Agency, looks at the already considerable impact and enormous potential of this fourth industrial revolution, using real-life examples drawn from the experiences of innovative firms, both big and small, based here. The magazine, together with the new Fribourg Network Freiburg website, were unveiled at a special event in the Le Vivier Technology Park in Villaz-St-Pierre.

Industry 4.0 is still somewhat poorly understood by the public at large, but refers simply, and primarily to the digitalization of processes, trade, communication and products. Advanced technologies like the Internet of Things, artificial intelligence, big data and 3D printing are transforming how businesses and manufacturers operate. They are ushering in game-changing innovations like ‘smart’ factories, where the machines and workstations all along the production chain communicate with each other continually and in real time.

For Olivier Curty, Cantonal Minister of Economic Affairs and Vocational Training, the present, and the future are looking bright, “Across the canton, digital transformation is already well under way among Fribourg’s flagship companies, from aeronautics experts to specialist providers of metal construction elements and building chemicals. It is a process facilitated in some cases by the use of proprietary solutions developed by local firms who are at the forefront of fields like the Internet of Things and semiconductors.”

The multisectoral and cross-cutting nature of Industry 4.0 means that it is not the exclusive preserve of the secondary sector. According to Jerry Krattiger, Director of the Fribourg Development Agency, “The service sector not only provides essential support for the changes under way, but is also a potential beneficiary of the opportunities which Industry 4.0 offers in many areas of the bioeconomy. These components, both of which are central strands of the canton’s development strategy, complement and enhance one another.”

The Fribourg Development Agency (FDA) unveiled the 2022 edition of Fribourg Network Freiburg on Thursday, 1 September 2022, at the Le Vivier Technology Park in Villaz St-Pierre.  As part of the launch, the FDA organized a special panel discussion, featuring Adrienne Corboud Fumagalli, President of the Federal Communications Commission (ComCom) and independent IT consultant and board member of several companies, as well as representatives from the company Asyril, the iPrint Institute and engineering firm SDATAWAY. Together, they shared their experiences of the digitalization process, and discussed the challenges that this transformative process presents.

You can watch the panel discussion in full here

A NEW WEBSITE TO ACCOMPANY THE LAUNCH OF THE MAGAZINE

Fribourg Network Freiburg (FNF) is the official magazine of the Fribourg Development Agency (FDA). Published annually since 2001, the magazine takes a closer look at the latest products, projects and business news from the canton, as well as the companies, universities, research institutes, centers of expertise, and technology and innovation parks behind them. Of particular interest are the bioeconomy, Industry 4.0 and technology transfer.

The digital version of FNF is available in English, French and German, and the modern, easy-to-navigate website www.fribourgnetwork.ch offers additional editorial and multimedia content, and is regularly updated throughout the year.

Hard copies of FNF are available in English only. The 2,000 copies which are printed every year are distributed among international business circles, Swiss embassies and consulates abroad, as well as the leading fiduciary and economic development agencies in Europe, America and Asia.

News
Share
FDA signs a record year in 2021 with, for the first time, over a 1,000 new jobs announced Previous
New gene therapy laboratory at the Biofactory Competence Center in Fribourg Next